Although there is a wide variety of information about his life and origin (the Bayat tribe of the Oghuzs or the Kayı tribe), there are some things that can be said about Dede Korkud based on the Encyclopaedia of Islam in this study. There are statements that Dede Korkud, who is known as the sheikh of the beys in his own time, is from the Bayat Tribe of the Oghuzes in Reşîdüddin’s “Câmiʿu’t-tevârîḫ”, and from the Kayı Tribe in “Şecere-i Terâkime”. In “Saltukname”, Dede Korkud is shown as one of the Ottoman descendants. Dede Korkud was with the Khan named “Kanlı Yavguy” as a consultant until his death. Although the rumors vary, Dede Korkud, who lived between 100 and 300 years, is referred to as a qualification in many ways. When talking about him, some people talk about him as the ancestor of the people, the Oghuz elder, a sage who gives advice and guides, while others talk about him as a Folk Poet.[1]

Dede Korkud has a special importance in the perspective of Prof Fuat Köprülü. Because he says: “If you put all Turkish literature in one eye of the scale and Dede Korkud in the other, Dede Korkud will still outweigh.”[2]

It was thought that there were two copies of Dede Korkud’s book until recently. The first of these two copies, consisting of 12 legendary stories, is in Dresden, Germany, and the second is in the Vatican. The third copy was found in the geography of Turkestan recently.[3]

It is thought that the work of “Kitab-ı Dedem Korkut Ala Lisânı Tâife-i Oğuzân“, which is one of the most prominent works of the oral tradition, was told by Dede Korkud, who lived in a period between the 9th and 11th centuries.

If we look at the content of these stories, which were written down in the 15th century, it can be seen that many issues are mentioned, from the lifestyles of the Oghuz Turks to their beliefs. Besides, it is possible to say that these stories are full of war scenes. As can be seen in many of the old manuscripts, some verses and hadiths at the beginning of this work are remarkable (Image 1). 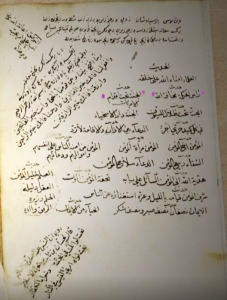 In addition to their epic features, Dede Korkud stories also contain didactic elements. The prominence of virtue, morality, goodness and truth in the stories reveals this clearly. Respect is also one of them. The work of Dede Korkud, which is the mirror of Turkish society, actually constitutes a reference source for the structure of society. Since it is the subject of a different research, I will briefly touch on the issue of respect for the mother. “Heaven is under the feet of mothers.” I think it is sufficient to mention the phrase.[8]

The motifs and symbols in the stories should also be mentioned in this study. In the texts containing some concepts related to Islam, “terms such as vow, charity, salawat, ism-i a’zam, oaths and prayers” can be given as examples. However, traces of concepts such as tree, mountain and water can be found as an effect of Shamanism.

I think it is important that folk literature texts can be used as national works for educational purposes in children’s education. As a matter of fact, “Turkish Folk Literature offers various materials for children’s literature.“[4] In this sense, I would like to examine the present-day side of the Dede Korkud stories under two headings.

First, Dede Korkud stories are an important treasure in terms of being a resource for children as a cultural transfer in the sense mentioned above (in this sense, Muslim Turkish children do not need a “Spiderman” as heroes).

As a result of the research I have done, I have come across some cartoon-style works[5] that deal with Dede Korkud and his stories, especially with the technological possibilities. Although this is pleasing to see, if a Muslim Turkish child still sees “Batman” as a hero in his mind, these studies are always inadequate.

In addition, children’s programs with Meddah-style narrations are also made, albeit rarely. In my opinion, many more recent studies can be done to reach larger audiences with the opportunities provided by technology[6](Image 2). 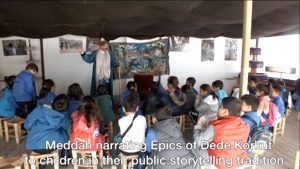