Power transition theory (PTT) was developed by A.F.K. Organski (1958). It is the most popular theory for explaining Russian foreign policy attitudes in Western world.

PTT aims to explain the causes of international conflicts and wars. It assumes that there are two kinds of states:

The relations between these groups define the nature of war and peace.

The system works as follows:

-A radical change of old rules

-If the demand is accepted a new status quo is established

-If not conflict (war) comes out 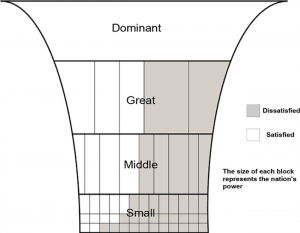 According to PTT school, Putin’s Russia is a typical revisionist state. For some American experts believe that Russia poses 4 problems for the US and other status quo actors.Putin’s regime does not seem to be a democratic one.

Russia has some diplomatic and strategic challenges, such as building up its nuclear arsenal and military. Russia threatens some allies of the US such as Baltic states, Poland, Finland, Sweden, Georgia and Ukraine. Russia’s cooperation with some “rouge” states (Iran, Syria, North Korea) creates another set of threats. 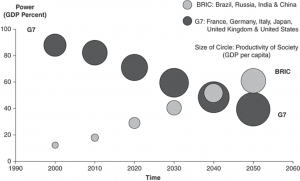 The followers of revisionist school believe that, in security affairs, Russia pursue a “zero-sum” view of the world. Western experts believe that if Russia obtain absolute security, it means absolute insecurity for others. Russia depends on its military capability. Use of force against smaller neighbours and illegal annexation became state policy.

The followers of PTT in the West reject any wrongdoings of the Western powers. They believe that no action of the West (NATO campaigns in Kosovo in 1999, and secession of Kosovo from Serbia, the US missile program in Eastern Europe, and above all the expansion of NATO) are not considered threats for Russia. PTT school accuses Kremlin of having a secret agenda for neo-imperialistic aspirations.

The moderate version of PTT tries to explain the radical change in Russian foreign policy under Putin leadership by the failure of democratic reforms in post-Soviet Russia.

As a result of this failure the Russian state was degenerated, turned to an oligarchic capitalist, highly centralised, kleptocratic bureaucratic type of state.

They believe that such a regime uses a hostile and aggressive foreign policy mainly for internal consumption.

At the same time increasing oil revenues at the beginning of 2000s made possible Russian state to have both “butter and guns”. As a result Russian living standards rose and the Russian state could launch military modernisation programs. The Russian leaders believed that Moscow could conduct a more assertive foreign policy and Russia could become a great power again.

The extreme version of PTT school sees Russia as a “rouge”. They believe that Russia is unable to internalise democratic values and the rules of international law 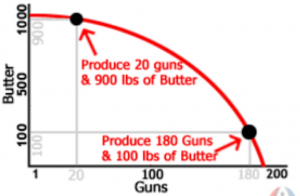 For them Russia had been always trying to be a part of Western world, however with the USSR that plan failed. Today, Putin’s Russia constitutes another moment of getting away from the West.

The Ukrainian crisis is seen as a catalyst and speeds up the getting away from the West process. Some European experts say that “Russia is now an ideological rival against us (the EU). On the one hand there is global liberal world order, on the other side we have an authoritarian and oligarchical state”.

Most of the followers of PTT see Russia as a “declining power with feet of clay”. The oil and natural gas constitute both strength and weakness for Russia. After the oil price crisis of 2014 Russian economy became weaker. Besides today’s Russia has no strong ideology comparable to the Communist era. Moreover Moscow’s international partners (China for example) are not seen as ideological allies. They all have their own agenda.

PTT cannot explain the current Russian foreign policy behaviour. Some experts believe that Russia is not revisionist, but a reformer state. Reformists are different from revisionists. Such states prefer to act on the basis of existing rules and norms rather than challenge them. Russia does not want to destroy completely the existing “rules of the game”. Moscow prefers to change some rules.

What is the power transition theory?