Although Huntington began his career as a specialist in American politics, his research and analysis branched into comparative politics, foreign policy, international relations, and modernization. His first major work, The Soldier and the State: The Theory and Politics of Civil-Military Relations (1957), examined the relationship between military professionalism and political power and the contradiction between American liberalism and military conservatism and helped to set the terms of debate about the proper form of civil-military relations. Perhaps his most important work is Political Order in Changing Societies (1968), in which he argued that in developing countries political decay and instability were at least as likely as the development of liberal democracy and that the “most important political distinction among countries concerns not their form of government but their degree of government.”

Huntington founded the journal Foreign Policy in 1970 and later served as president of the American Political Science Association (1986–87). He was an adviser to Vice President Hubert Humphrey during Humphrey’s unsuccessful 1968 presidential campaign, chairman of the Democratic Party’s Foreign Policy Advisory Committee in the mid-1970s, and coordinator of security planning in the National Security Council (1977–79) during the administration of President Jimmy Carter.

Emphasizing the rise of East Asia and Islam, he argued in the controversial The Clash of Civilizations and the Remaking of World Order (1996) that conflict between several large world civilizations was replacing conflict between states or ideologies as the dominant cleavage in international relations. 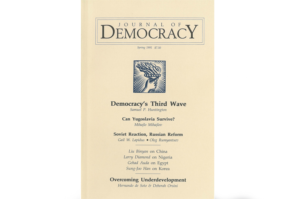 In this article, we discuss the Huntington’s thesis which his ideas on democratization process and its problem in the several countries in the world. At the beginning, he wrote his article published in the Journal of Democracy and further expounded in his 1991 book as ‘’The Third Wave: Democratization in the Late Twentieth Century.’’

Huntington describes global democratization as coming in three waves, the first beginning in the early 19th century and the third being a current event.

Countries faced lots of global political and economic events in many time in their history. But, according to Huntington, the main indicators are the fundamental values and their cultures. Political arguements such as democracy, pluralism, free elections human rights, seperation of Powers, market, civil society, fair distribution of income, anti-authoritarianism, transparency, civil rights  are critisized by S.Huntington.

Huntington, interpreted this globalization process, relations of countries and several effects of their interior political implementations in his works.

Firstly, we will explain the meaning of the democracy. There are lots of different explanation on democracy and its varieties. It depends on the different cultural bases, political regimes of countries from different perceptions. One of the definition of democracy is as follows:

‘’A form of government in which the people rule themselves directly and continiously, without the need for professional politicians or public officials’’(Heywood, Politics, 89)

Samuel P. Huntington defined three democratization wave in worldwide during to between 1820’s and 1990’s.

The first long wave of democratization began in 1820’s, with the widening of the suffrage to a large proportion of the male population in the US. At its peak, the first wave saw 29 democracies in the world. This continued until 1922, when Benito Mussolini rose to power in Italy. The first wave lasted from 1922 until 1942, during which the number of democracies in the world dropped to just 12 with the first ‘’reverse wave’’.

The triumph of the Allies in World War II initiated a second wave of democratization that reached its zenith in 1962 with 36 countries governed democratically, only to be followed by a second reverse wave (1960-1975) that brought the number of democracies back down to 30.

The third wave began in 1974 (Carnation Revolution, Portugal) and included the historic democratic transitions in Latin America in the 1980s, Asia Pacific countries and regions (Philippines, South Korea, and Taiwan) from 1986 to 1988, Eastern Europe after the collapse of the Soviet Union, and sub-Saharan Africa beginning in 1989. Exact tallies of the number of democracies vary depending on the criteria used for assessment, but by some measures there are well over 100 democracies in the world today, a marked increase in just a few decades. Many of these newer democracies are not fully “consolidated,” however, meaning that while they have electoral institutions in place, political democracy remains fragile. Reasons for this fragility include economic instability, continued elite dominance of politics, ongoing military interference in civilian affairs, and others. ‘’

There were many factors for occurence of the third wave transitions to democracy:

According to Huntington, cultural factors is so important for the democratization process. World’s great historic cultural traditions extend itself thanks to their attitudes, values, beliefs and related cultural patterns.These indicators leads to development of the democracy. Huntington thought that democracy is largely inappropriate for non-Western societies. In the early years of the third wave, George Kennan who US Ambrassador in the Soviet Union, declared that democracy was a form of government which evolved in the 18th and 19th centuries in Northwestern Europe, North America, Central Europe and border on the English Channel. According to Kennan, democracy was not compatible for the Asia countries and states which have the religious cultures/traditions of Confucianism and Islam. Huntington questioned that are Confucianism and Islam compatible with the democracy? Can democracy suitable for the countries which have Islamic and Confucian cultural patterns? Also there were many differences between Catholic and Protestant countries as in point of consistency with democracy. When we scrutinize the history, it is clear that  lots of Cathollic states could adopt the democracy, but Protestants not.

Cultures, historically are dynamic, not stagnant. One example, Spanish culture was typically described as traditional, authoritarian, hierarchical, deeply religious, and honor and status oriented. By the 1970’s and 1980’s, these concepts had little place in a description of Spanish attitudes and values. Cultures evolve and, as in Spain, the most important force bringing about cultural changes  is often economic development itself. Therefore cultural and political changes related with the economic extension.

End of these investigation, we awared of the several effects of the process of democratization and its reverses. Likewise we recognized the complexity of these political and cultural movements and theirs complex connections.