People genereally think that writing an academic paper or research paper is too hard.  However, when people learn how to fit phases of research it wont be as complicated as it seems.At the structure of reseerch part we will learn how to form basic research Project which is formed from beginning , middle and end & know the different types of question which is beneficial for research project as major component.

We can think structure of a research Project as hourglass . Researcher starts Project with a broad topic like what programs enable the unemployed to get jobs. However researcher have to narrow the research question down by formulating hypothesis or focusing on a question because s/he cant adress adaquetly in a single research study. That research question often stated in the context of some theory. Theory for our broad question may be ongoing support services are needed to assure that the newly employed remain employed. Accordingly research question may be For instance, Is a program of supported employment more effective (than no program at all) at keeping newly employed persons on the job? Albeit topic norrow down this is still too general to be studied directly. Researcher needs a hypothesis. For example for pur topic it might be the Metropolitan Supported Employment Program will significantly increase rates of employment after six months for persons who are newly employed (after being out of work for at least one year) compared with persons who receive no comparable program. Thanks to hypothesis researcher can realize what the study is trying to assess in a Project. This was the narrowest point of hourglass and at the same time exact observation point of the researcher. 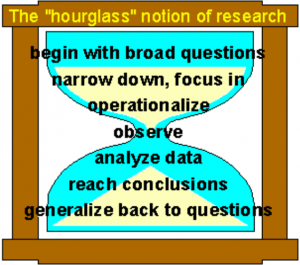 After collecting all the data which are necessary researcher starts to make an analyse but even for one hypothesis there may be lots of analyses which researcher can conduct. Then, it is important to formulate some conclusions like what happened as a result of computerizing math program. Finally in the lights of this conclusion researcher has to make a generalization about the related topics.

COMPONENTS OF THE STUDY

What are the basic components or parts of a research study? The important point for a project is that.

We have in a casual study cause&effect. Cause can divide into two one of them is events controlled by researcher and other one is events causes naturally or aout of control of researcher. Effect is the outcome of the study which I wish. Genereally researchers interested in an outcome from lots of outcomes which is most reflective to his or her research problem.  In our hypothetical supported employment study, we would probably be most interested in measures of employment — is the person currently employed, or, what is their rate of absenteeism. The important point here isto make a distinction between our ideas and how they implemented in reality. Ideally in the researches we would like the two to agree.

After cause&effect second important component of the research is units that participate in the Project. Researcher has to define the sampling which is part of the society truely. For instance, in studying a program of support services for the newly employed we can’t possibly include in our study everyone in the world, or even in the country, who is newly employed. Sampling divide into two, one of them theoretical population of interest to our study  and other one is the group which researcher work on it. As above mentione the Word “units” used for basically group which researcher gather information. However, sometimes can be organizations, groups or geographical entities like city.

The last component is research design. In the researches researcher make compariment the effects of their cause with other conditions relative to his or her interest. This place generally determining how people wind up in or are placed in various programs or treatments that researchers are comparing.

İf we look as an orderly list of it;

Researcher have to know which system type of logic s/he will use at the research paper.  There is two reasoning methods, called as inductive and deductive.

Deductive method or its another name “top-down” approach is reasoning from general to specific. Accordingly, at the beginning, this method concerned about testing or confirming hypotheses.

Researcher has to narrow down theory for a succesfull research project to Hypothesis. Then , collect observations have to adress the hypothesis.  Finall, that gives us testinh our hypothesis with specific data which mean is confimation of our original theory.

On the other hand inductive way or “bottom up” approach works in other way. It moves from specific topic to a broader generalization. Accordingly, people can understand that for the inductive theory especially at the beginning have open ended and exploratory. Researcher here make specific observations then detect patterns and regularities. Thanks to them formulate hypothesis then end up by developing some general conclusions or theories. 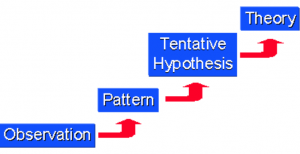 Briefly deductive&inductive methods very important for a research project even people like or dislike have o learn observing patterns in the data that lead them to develop new theories.

At the last part we will introduce you to validity. By learning validity which is beneficial to judge the research Project. We can understand why we need to do certain things in order to assure quality.

Researcher have to observe the perspective of the philosophers which argued by them for at least two millenia, how we know about the world arround us? Actually there are lots of perspective but here there is only Posıtıvısm & Post-Posıtıvısm. Understanding these two technical Words sometimes hard but important thing is spending time on it. On that way, we will spend time.  Firstly, people have to make distinction between pistemology and methodology. Epistemology comes from knowledge which is greek Word and concerned about the phylosophy of knowledge. Methodology technically different from it.Methodology is much more practical but focuses on specific ways which people can use to try to understand  world better.

People think of science as boring, cut-and-dry, and they think of the scientist as narrow-minded, esoteric and the ultimate nerd. Actually this stereotypes may observe because domination of a particular idea which is positivism. However from now on era of post-positivism started and those stereotypes of the scientist no longer hold up.

Before critisizing positivism people have to know what it is. Basically it is rejection of metaphysics and according to that idea goal of knowledge is simply to describe phenomena that we experience. To put finer point on it for the positivist most important thing is to stick observed and measured one anything beyond that is impossible for them.

Positivist for predicting and controlling world see science which is at the same time mechanistick for them as a way to get truth. According to the them world is deterministic and everything related to cause&effect laws. They use deductive reosoning if result doesnt fit they revise and  theory to reach better reality. Positivisit believe in empiricism which see observation and measurement as core of science.

After positivist era especially idea shifted away from positivisim to post positivism. However, it was not a shift which is slightly on the contrary realize by rejecting all the tenets of the positivism. According to post-positivism between what scientist are doing and people are doing related to each other . There is no difference about kind between them except degree like sciencist make observation deeply but peoply may be not be carefuly about their everyday life.

One of the most common forms of post-positivism is a philosophy called critical realism. Critical realist believe that reality may be different even what we can study scientifically. Positivist were also realist but the differance between them post positivist says that observation is fallibale. Positivist says that the goal of science uncover the truth but for the post positivist even the aim is the same, fort he reaching that truth which will uncover really carefull studies run by researchers. Observations are fallible because people act according to their cultural experiences, world views, and so on. Most post-positivists are constructivists who believe that we each construct our view of the world based on our perceptions of it. Because of perceptions of people every time decisions will be fallible. Humans are actually constructed imperfect.Then, in the light of this informations  what is meant by objectivity in a post positivist world? Positivist answer that question as scientists have to put aside all biases and the believes. However post positivist believe that it is not possible because all the humanbeings dependant to a kind of perspective so it is not possible to expect objective decisions from humans. Only way to find best truth is crtisize each others works especially by the help of scientist. This way even not beneficial for reaching objectivity perfectly, people may approach it.

Firstly we have to highlight that the question of “Validity of what?” is so important because technically we dont mean measures, samples and designs we mean proposition, inference or conclusion. 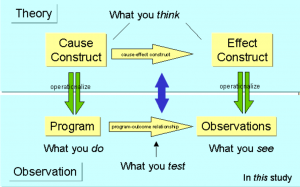 Validity divide into 4 diferent subtopic. Every of them adress different methodology so you have to know something about “How we investigate a research question?” First and seconde are conclusion and rhe imternal these are referring bottom part of the shape. Third one is construct and this refers to establish linkage between bottom and top part of shape. And the last one is External, this one concerned  about our theory.

“In this study, is there a relationship between the two variables?”

Actually it is the most important question for the validity of the conclusion part. As an answer to that question people may see there is a relation or not between  two variables. Also answer may be there is a positive or negative relation etc.

For measurement of the validity of internal part we generally ask this qustion. Here researcher try to make claim outcomes of our study caused because of researchers’ treatments or programs.

We have to conclude our research with a well-designed or well-operationalized construct like did we operationalize well the ideas of the cause and effect. Thanks to answer of the question researcher may understand validity of construct can be assured or not.

Assuming that there is a causal relationship in this study between the constructs of the cause and the effect, can we generalize this effect to other persons, places or times?

As we can see all the question for providing a good research components are following and completing each other. 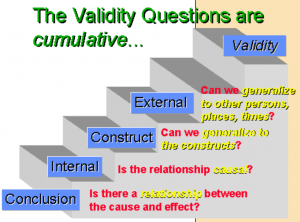 As a component of a research, threats of validity so important. Researcher normally try to decrease the plausibility most likely threats to validity. However sometimes conclusion of the research and what we are examining may be wrong. This call like threats of validity.

This article is the edited version of this article: http://www.socialresearchmethods.net/kb/philosophy.php