In general, it has been noted that investors borrowed large amounts of money to create speculation in the stock market for the 1929 depression, and then the stock market fell sharply. This meant that many people and banks also went bankrupt. The fact that this was a very painful situation could easily be seen on the faces of the participants in the documentary. It can be said that after this crisis, a crisis that will last for 10 years has emerged in the world. This is the story of a financial disaster.

Stock prices had fallen considerably and people could no longer find anyone to sell their shares to in those days. Along with a sharp decline in the stock market, there were serious decreases in the values of the stocks. Many people (I mean investors) panicked and started to gather. It was impossible to understand this crisis in those days until someone said “yes, a big crisis is waiting for us”. This is because the years of prosperity prevailed until then, and in recent years the stock market had only risen. No one could have predicted that something like this would happen. In order to determine the cause of the crisis, it is necessary to go back to 1919. Because the United States of America had emerged victorious from the first world war on these dates. Changes began to occur in daily life and some luxury items became a necessity. Mass consumption was the subject of discussion at that time, and new purchasing methods (consumer credit, possibility to pay in installments) were on the agenda.

A new economic era was beginning, and it propagated the idea that every American has the right to be rich. In this way, both the people were looking for new ways to get rich, and the government had sold bonds, known as a kind of public debt, to pay the bill of the war: “Liberty Bonds“. In this system, at the repayment stage, the public was earning interest income over the bond value. In this way, many people from the public began to become investors in a way they thought was safe.

Wall Street bankers entered the industry in a different way. Wall Street bankers, who used to be privately traded and elite bankers, saw an opportunity to invest. Of course, this process that the state started with these “Liberty Bonds” caused this. Now there was a public whose investment culture had a place in their life. And these companies began to market other valuable products such as stocks, primarily corporate bonds. This must have been well advertised among the public, as the business of investing in stocks, which was considered extremely risky before, was now being touted as a very respectable business.

Together with the intermediary companies, every segment of the public would be able to play in the stock market. In this way, many people started to become shareholders and were trying to get rich from the stock market. The stock market had become such a part of daily life that many business people and artists, who had the potential to appeal to the public, were also supporting it, along with radios and mass media. 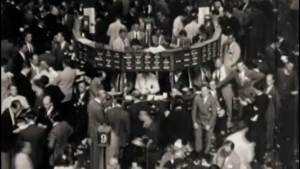 During these periods, various speculations were made and new famous people who became rich in the stock market in a short time emerged. Stocks were now bought even with borrowed money. Those who did research about that period were saying: “There was no limit to buying stocks with borrowed money, and people were borrowing terribly to buy stocks“.

In the wing of the government, it can be said that there is a comfort given by indifference. The US president at the time, Calvin Coolidge, was also an investor and said that the state should not be an obstacle to this growing US economy and stock market. Thus, the power of Wall Street grew without government control. Thus, the relationship between elite bankers and politicians was carried beyond the magazine dimension. The words of the researchers about the stock market of this period are remarkable: “The stock market in this period was like a big casino and was professionally managed by deceitful and speculator bosses“. Herbert C. Hoover, who later became president, did not regulate the market like his predecessor Coolidge. But Hoover knew something was wrong…

The stock market had heated up and some foresighted people who realized the event had withdrawn from the stock market. The following quote by Joe Kennedy explains the situation completely: “If even a shoemaker understands the stock market as much as I do, maybe it’s time for me to go“.

After the necessary meetings were held, the shares started to be bought again as a way to reassure the public and it was noted that there should be no cause for panic. However, decrease of the value of the shares could not be avoided and many people and symbol companies of the prosperity period went bankrupt. This sinking has been the subject of songs as follows:

“Oh, the market is not good today,

in fact, they all went down in value with every click of the printer“

These events led to the suicide of some people who had come to a certain period of their lives and lost all their property. Yes, the streets of Wall Street have seen it. It is possible to say that these events actually spread to the whole country over time, creating a negative externality. Because people who are not related to the stock market have also been adversely affected by this crisis. With the bankruptcy of the banks, many people’s money remained in the system, and with it, many people were laid off.

The democratic party’s coming to power in the 1932 elections and giving messages of confidence brought a control over the market. Many people have been investigated regarding this crisis. Finally, I encountered the interpretation that the regimes in Germany, Russia and Italy around the Second World War emerged as a result of the need for an anti-capitalist authoritarian movement after the Wall Street crisis. It was surprised me.

To watch the documentary: https://thoughtmaybe.com/1929-the-great-crash/